Robert Hodge, ​Hopefully Marvin and James can get me through the paint, 2016, mixed media on reclaimed paper, 15 x 13 inches

Arts+Leisure is excited to announce Robert Hodge's first solo exhibition in New York and at the gallery, 20ft Tall. The works in this exhibition showcase Hodge's innovative multi-media based practice, which starts with the artist scouring the streets of Houston and collecting  discarded materials such as random papers, fliers, and billboards. He then fuses these materials together into multi-layered compositions, integrating imagery and phrases drawn from politics and twentieth century music into a highly corporeal and complexly layered formal framework.

The exhibition title is derived from a song of the same name by Erykah Badu, a song which, in the artist’s own words, is about “recognizing our potential and overcoming insecurities and obstacles if we could only realize how powerful and resilient we are.” In many ways, 20ft Tall is a celebration of this potential, and fragments of twentieth century African American culture, particularly relating to music, form the raw materials of the work. Referencing jazz and soul icons as well as contemporary hip-hop and R&B artists, Hodge is sensitive to the notion of a cultural continuum, and he gracefully interweaves these temporally distant sources into a cohesive and organic whole. By juxtaposing these icons with allusions to politics, Hodge implies the tensions running below this stream of cultural and artistic expression.

20ft Tall is comprised of two bodies of work, a series of small collages and a group of larger, text-based works on reclaimed paper. The collages display Hodge’s ability to imbue his flat source material with dimensionality, and the strong lines of his layered cutouts, punctuated by stitch work, creates a stimulating surface texture.  The subject matter of the collages suggests the complexity of the African American experience, with a particular nod to the profound hypocrisy that underlies it. Merica includes an image of Elvis Presley, who was frequently denounced for his unfair appropriation of the work of black musicians, alongside an image of Sam Cooke, a diagram of a slave ship and photographs of John F. Kennedy and the Trump campaign’s notorious “Make America Great Again” hat; the juxtaposition of such varied sources illustrates the hypocritical attitudes faced by black artists and musicians throughout American history. Another work, Always Getting the Shaft, playfully references the movie soundtrack, but as Hodge tells us it also “seriously addresses the issues of women of color dealing with feminism and carrying the democratic party on their back among other issues,” which we see literally depicted by the image of a white man riding on the shoulders of a black woman.

The works on reclaimed paper, consisting of terse texts scorched into the thickly matted paper, project an altogether different tone, though their message is still that of power and resilience in spite of obstacles. The texts, drawn from the lyrics of rappers LL Cool J, Kendrick Lamar, and the group A Tribe Called Quest, emerge from the paper backgrounds with a proud confidence, resonating like mantras. As in the collages, Hodge gives great attention to the surface texture of the works, utilizing scorch marks, torn edges of paper, and stitch work to create a dynamic and organic appearance. These layers also speak to stratification - archeological and geological, social and economic. In works such as What Rhymes with Gentrification?, the artist addresses the detrimental impact of the title issue on several levels. By cutting into the compositions and excavating the layers beneath the surface Hodge directly addresses the question with both his materials and his language, simultaneously exploring ideas of recovery of experience and of memory, culture, and history.

Please join us for the opening reception with the artist on Saturday, January 14th from 7pm to 10pm. Refreshments will be served. A full color, limited edition artist's book will be available for sale. For further information, please contact nick@artsandleisure.net or call 212.828.5700. 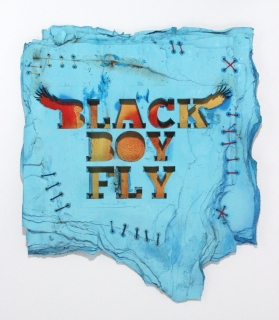