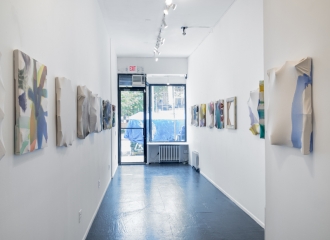 Arts+Leisure is the project space of Lower East Side-based gallery Freight+Volume. Established by Nick Lawrence (co-founder and former partner of LFL Gallery in New York and owner of DNA Gallery in Provincetown, MA) in 2005, Freight+Volume was formed by combining the text-based, narrative philosophy and limited edition book focus of its two-year predecessor, Volume, with the motivation to show dynamic, visceral, and provocative new work in all media and dealing with a range of subject matter. F+V is dedicated to showcasing the work of emerging and established artists, and in particular work which is innovative and not afraid to take risks. While F+V is especially interested in narrative and text-based material, ultimately our predominant criteria is the quality of the work itself, regardless of technique, content or style. In keeping with the tradition of publishing with which the gallery was founded, F+V magazine was launched as an outlet to learn about the artists with whom the gallery works, as well as their friends and influences. The magazine is a medium through which to explore not only the work of the artists, but the creative process and the cult of personality. In addition, Freight + Volume regularly publishes limited-edition artists' books.

The DNA Gallery, founded in 1994 by Nick Lawrence, has for the past 8 years been home to the DNA Artist Residency Program. Every year artists are invited to participate in a one or two-week residency in Provincetown, Massachusetts. While on the Cape, artists create new work inspired by their surroundings or continued from their existing studio practice. They can work both offsite and at DNA in a 2,000 square foot studio, and are also provided free housing. For its eighth season, over sixty artists were invited for individual residencies.