Arts + Leisure is pleased to present Peter Schenck’s solo exhibition, Clear and Present Danger, running from August 6th through September 11th, 2016. For Schenck’s first project with Arts+Leisure, the artist will present a new series of mixed media works on canvas.

In this entirely new body of work, Schenck brings to life a playful cast of characters as they perform everyday tasks, endowed with a comically grotesque twist that has become his signature style. Yet despite their quirky sensibility, there is an underlying, but consistent duality just beneath their colorful surface, a quiet seriousness that denotes the deeper intentions of their creator.

Speaking of his subjects, the artist acknowledges, "My figures are loud and bright, but they are equally evasive and on guard." From stand-up comedians to tuxedo-clad lounge singers to an artist in the studio, each character serves as a vessel, a symbolic representation of fleeting daily experiences scarcely acknowledged and rarely examined.

In In the Studio, a distorted humanoid stands before an easel, though it is unclear whether the creature is looking at the canvas or at the viewer, in an act of creation or confrontation. "This body of work deals with both creative and destructive acts," says the artist of this ambiguity, a recurring theme throughout the exhibition. "Many of the figures in these works are clutching knives or brushes, or both." Also recurring throughout this series are allusions to blood, eruptions, and various explosions, which might be considered violent were they not executed with Schenck's lighthearted, almost cartoony touch.

"Blood is present in these pictures, much of it in an almost frozen state, a very controlled splatter," Schenck explains, shining some light on the conceptual framework of this motif.  "It's sort of a nod to Lichtenstein and his fascination with depicting explosions... We know explosions happen in an instant, but it's a great visual trick, a tool to just freeze time. I think that's the humor and dumbness." The result is not a morbid portrayal of graphic violence, but a hyperbolic and humorous exaggeration that is more symbolic than representational, bringing to mind contemporary issues of desensitization to violence, in particular gun violence, in our culture.

These works rely heavily on modern-day symbolism and familiar shapes to convey their message. The characters do not mean to represent anyone in particular, but rather to represent everyone on a universally relatable level. However, Schenck is quick to acknowledge their autobiographical nature. Of all of the pieces, it is If Looks Could Kill, a portrait of a bulbous creature in a suit, with which the artist identifies with the most. Instead of knives or paintbrushes, this figure wields a radioactive microphone, poised before what one must assume is his mouth-orifice. "[It] is a nod to stand-up comedy, something I did for a few years," he divulges. "I envision him halfway into his joke and perhaps not getting to the punchline, just in an awkward pause."

In nearly all of the work presented in this exhibition, its disquieting power is in that aforementioned pause. It is in capturing, and thus freezing, a moment in time, a purgatory that offers both suspense and relief. "That's pretty much what I'm after in this work... action and gesture, but also a moment of awkward standstill that exists somewhere in the center of it all."

Peter Schenck has presented his work in solo exhibitions at multiple venues including the Delaware Center for Contemporary Arts and Le Meridien Hotel in Philadelphia in addition to numerous group shows at galleries including Victori + Mo, Lesley Heller Workspace, and Tiger Strikes Asteroid. He received his BFA from Boston University and his MFA at the University of Pennsylvania. He lives and works in Brooklyn, NY.

Please join us for the opening reception with the artist on Thursday, August 18th from 7pm to 10pm. Refreshments will be served.
A full color, limited edition artist's book is available for sale. 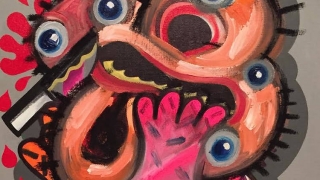 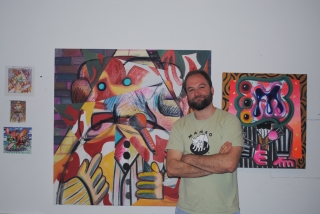