For his first project at Arts+Leisure, Aaron Johnson presents ¡Eso Si Que Es! (S.O.C.K.S) - roughly translated, "It is what it is." ¡Eso Si Que Es! focuses exclusively on Aaron Johnson's sock paintings, and opens on the same day that Pisockophilia closes at Stux + Haller Gallery. We thank Stux + Haller Gallery for their cooperation on this special project.

The exhibition features two very large sock paintings alongside a series of small sock paintings. All of these works teeter the line between abstraction and figuration.  Wild and wooly sock creatures emerge out of an exploration in painterly formalism of the sock as ready-made, battered and mangled impasto. An important element of the sock paintings is the collective involvement of the sock donors.  All of these socks were collected in the mail, through calls put out on facebook, in exchange for small drawings - a gift exchange. The works are dependent upon the contribution of old socks from the sock donors, and in that fact, the dynamic of the studio process becomes less closed and more collective.

The following is an interview between Samuel Jablon and Aaron Johnson for Hyperallergic:

Aaron Johnson: First it was an absurd gesture.  A goofy irreverent attitude toward painting and toward my own painting practice.  It was a painting joke.  Deeper layers of meaning piled up, though, as the paintings proliferated.  Formally, the sock is a ready-made brush stroke, sock impasto, a painterly device.  The spongy/gnarly/hole-torn surface built up with socks makes interesting painterly implications. These paintings can have a vitality like squirming flesh, surfaces punctuated with orifices, bulges, and a swirling seductive physicality.  The humility of the sock is important, a poor material in the Arte Povera sense, a banal and accessible materiality.  On top of that, the sock is a shed skin of the individual.  The sock is a grotesque Freudian object, with an open end an a phallic end.  An artifact of the steps walked in a person's life.  I like to imagine each sock a talisman, a magical object containing a drop of the psyche of the sock donor.  So a piling up of socks in a painting is a piling up of fragments of consciousness.

SJ: We met through Facebook where you put a call out for socks in exchange for a drawing. Could you talk about this process?

AJ: A driving force of this new series has been the exchange: people send me a batch of old/mateless/holey socks, and in return I send each sock donor a drawing.  The list of sock donors is over 100 now, so 100 drawings have gone out in exchange, and a couple thousand socks have come into my studio.  The exchange brought an element of community into the work, made the walls of the studio porous, the painting process less solitary and more expansive. In a very real way, these works could not have been made without the contributions of other people, and metaphysically, it brought a sense of collective consciousness into the work.

SJ: How did you start working with socks?

AJ: An idea in a sketchbook several years ago, in a list of ideas for other ways to make paintings, I wrote "stick socks on canvas".  The idea stayed in the back of my mind for years before I finally got to a rupture point in my studio practice, and then I stuck a sock on a canvas…

…At a certain point it occurred to me that the sock is like a little death; it's a shed skin, a hollow carcass; when mateless it is a lost partner, slipped into obsolescence; socks get used and worn out and replaced, a cycle; a life could be measured in the socks spent in a lifetime.

Aaron Johnson holds an MFA from Hunter College, 2005, and has lived and worked in Brooklyn since 1998. His work is in permanent collections at such institutions as the Museum of Modern Art, the Fundacion Mehr, and the Weisman Foundation. His work has been included in museum exhibitions at The Museum of Modern Art, NY; The Hudson Valley Center for Contemporary Art, The Knoxville Museum of Contemporary Art, and The Katzen Center at American University. He is the recipient of many awards, including The MacDowell Colony Fellowship, The Corporation of Yaddo residency, The Marie Walsh Sharpe Space Program, and the VCCA Fellowship. Johnson’s work has been reviewed in numerous publications, including The New York Times, The Huffington Post, The Village Voice, Art News, and ArtForum.

Please join us for an artist’s reception with light refreshments on Saturday, March 21, 7-10 pm. The exhibition is accompanied by a full-color limited edition book, designed by Ninze Chen, available for sale signed or unsigned. For more information please contact nick@artsandleisure.net, or call 212.828.5700 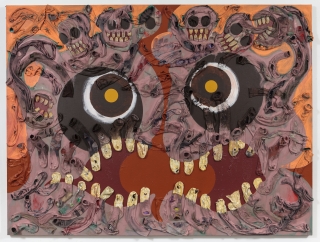