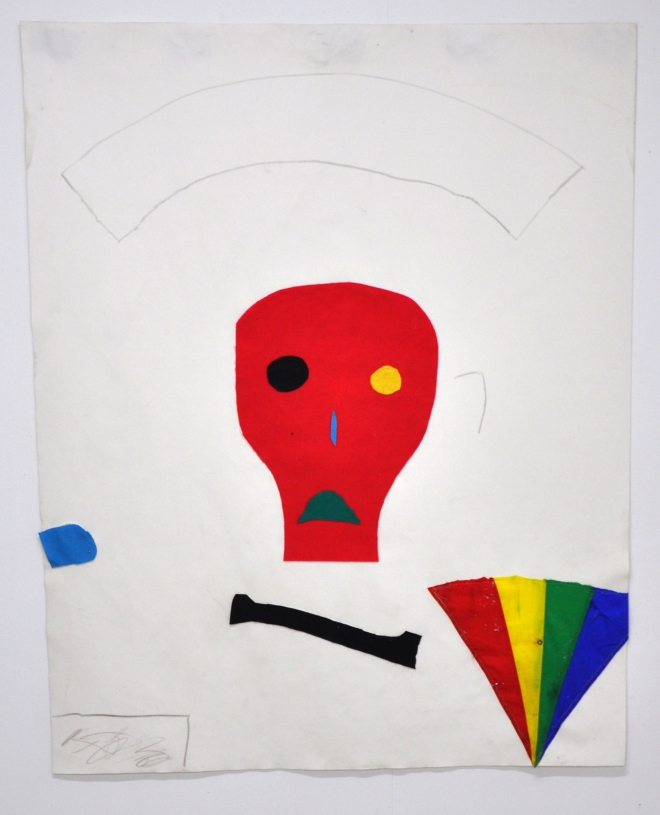 The exhibition features the new collages on fabric by Eloy Arribas drawing upon the allusive power of language and forms.

The latest artworks by Arribas present a network of associations in a discourse of shifting relationships, grounded in a vibrant multimedia framework. A self-described “plastic artist,” Arribas embraces spontaneity and the impromptu dynamism of artistic creation. Fields of negative space are punctuated by freewheeling abstract forms and seemingly incidental marks, bursts of unfettered expression that charge the work with a surging energy. Unbothered by conceptual pretenses and the influence of the contemporary art market, his practice exists as a pure dialogue between artist and canvas.

Language plays a central role in his art, and several of the collages feature words which, divorced from a narrative structure, take on an iconic, sigil-like character. Paired with scrawls, smudges, and other bits of studio detritus, the collages evoke a disjunction between text and image, a sort of non sequitur that reflects both the allusive possibilities of language and its restrictions, for example, the feeling of being “at a loss for words.” As postmodern parables of communication and miscommunication, the works grasp for a mode of describing life’s ambiguous states, a response, in the artist’s words, to the lack of nomenclature that we have for the world of sensations, fears and desires.

Eloy Arribas was born in 1991 in Valladolid, Spain, and received his BFA from Salamanca University in 2014. He has had solo shows at Galería Herrero de Tejada, Madrid, Spain; Silves Arte Contemporáneo Gallery, Madrid, Spain; Mojácar Factory Gallery, Mojácar, Almeria; and DA2 Salamanca, Salamanca, Spain. He received the Premio-Grant from the Corselas Foundation of the University of Salamanca in 2016, and has completed residencies at Atelierhaus Salzamt in Linz, Austria, as well as at Javier Silva Gallery in Valladolid, Spain.